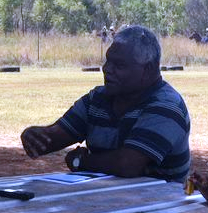 With regard to the Yugul Voice Meeting in June 2017, Ian highlighted that the only people that were allowed to attend were Yolngu. There were no Balanda at the meeting, except for one man from Yugul Mangi Aboriginal Development Corporation who took minutes. The reason the meeting was run like this was because at the last meeting Balanda kept talking over the top of Yolngu and they dominated the conversation.

“Having a meeting with just Yolngu leaders where they could have a conversation and make decisions for their own community is a strong example of local decision making.”

Ian Gumbula is talking here about elders making decisions for their own communities, and re-asserting their authority. A good guide to positive and productive engagement is the level of enthusiasm and participation from people in the room. This is often a better guide to levels of understanding, than asking people if something is clear or not. When a meeting is run by Yolngu, for Yolngu, communication engagement and understanding is at its best.